If Corriere dello Sport on Thursday are to be believed, we are ever so close from getting an answer to the big question mark surrounding Christian Eriksen’s future at Tottenham.

Will he move to Inter in January, or will the Dane have to wait until the summer to leave London on a free transfer?

The biggest hurdle remains the price, but the Serie A side aren’t ready to give up, as Corriere dello Sport explain they ‘are ready to attempt a new assault’, with ‘new contact’ expected today.

The talks that took place on Tuesday ‘did not give the desired results’, but it’s believe more will happen on Thursday during a conference call during which ‘steps forward’ are expected to be taken by Beppe Marotta.

One of the ways they could do that is by increasing their offer, as the €5m standing between the two sides ‘isn’t an insurmountable obstacle’.

However, the feeling is that Inter will simply increase their offer ‘by €1-2m’ through bonuses, which might not be enough to convince Daniel Levy. 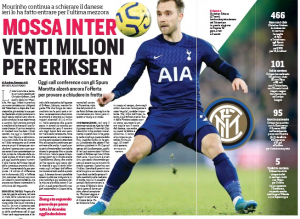 The Italians reckon they might have a better chance of seeing the Tottenham chairman’s stance soften next week, as we draw nearer to the end of the window, but if the end move is to simply pay the €20m Spurs want, why wait?

On the other hand, ‘if everything falls into place today, Eriksen could be in town (Milan) tomorrow to undergo his medical and watch from the stands against Cagliari’.

That’s a big if, though, and it’s likelier this story will drag into next week, and if anything does happen, it’ll probably do so in the final days of the window.