Originating in Scotland via the Daily Record, the story of Marseille’s interest in Olivier Ntcham took some time to get confirmed in France.

There were never any doubts regarding the outlet’s claims, but it always adds weight to the story when the media on the other side give it the two thumbs up too.

After national outlets discussed it, local newspaper La Provence followed suit on Friday, going out of their way to confirm that Marseille have reached out to ‘gather information’ about the Celtic midfielder, who struggled with injuries last season.

The 23-year-old still managed to make 37 appearances in all competitions, scoring six goals and assisting teammates once along the way. 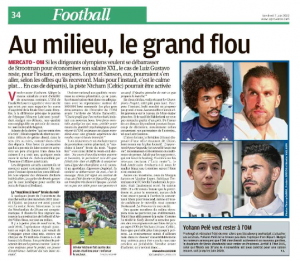 Needing some reinforcements in midfield, it isn’t surprising to see Marseille asking around, especially for young players eager to prove a point, but La Provence explain nothing has happened beyond the information gathering for now.

The local newspaper explains the competition for Ntcham appears rather tough, making it a bit too expensive for now.

However, should they sell a few of their unwanted players in the next few weeks, it could quickly become feasible.