There’s a good chance Juventus could let Alex Sandro leave in the summer, but they would only do so if the right offer came in.

That is, at least, what Gazzetta dello Sport are reporting on Thursday, linking Manchester United and Paris Saint-Germain with the Brazilian left-back in the process, stating both clubs continue to ‘follow him’.

Prior to their purchase of Emerson Palmieri from AS Roma, Chelsea were the most heavily linked club with Sandro, but the Red Devils’ and PSG’s need in the position has seen them receive a promotion to one and two.

Not only that, but they’re also two in a very short list of clubs with the spending power required to convince Juventus to let their star go, as Gazzetta explain it would take an amount larger than €60m. 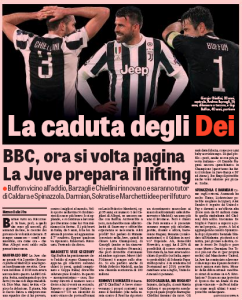 That amount is what Chelsea allegedly put forward during the January transfer window, only for it to be sent straight back to sender, as the Serie A leaders weren’t interested in weakening their side midway through the season.

However, it’s interesting to see €60m mentioned when, in February, the very same newspaper said the Blues’ bid was €70m.

Anything above would most likely see Sandro slot in between Virgil Van Dijk and Kyle Walker as the second most expensive defender of all time.

Whether Manchester United will be willing to spend that much on a defender, an area they haven’t really invested heavily in (both Victor Lindelöf and Eric Bailly were around £30m), remains to be seen.