“Moise has been perfect, on the pitch and off it”.

These were the words of Paolo Nicolato, Italy U21’s manager, recently about Moise Kean, Everton’s new ‘enfant terrible’, or, at least, that’s what certain members of the media are trying to portray him as these days.

The young forward was fined for turning up late to one of Marco Silva’s team meetings just before the transfer window, which immediately led to rumours of unrest and a possible return to Italy in January.

That’s continued, with Roma the so-called front runners to acquire the 19-year-old’s services, and yet so many obstacles stand in their way before they remotely stand a chance to reach a deal with Everton.

The biggest one is how much the Premier League side will want for the player they only signed in August, as the Serie A side aren’t made of money.

We’ve already covered bits about this previously, but Corriere dello Sport make it very clear on Tuesday that Everton would need to make some concessions. 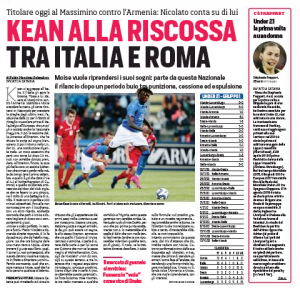 Corriere point out that if the Goodison Park side want to cash in ‘suddenly’ and for ‘a lot’, the whole operation would become ‘difficult, if not impossible’.

And even then, as Paolo Nicolato said, if he does go to Roma, is there any guarantees he gets more game time or performs any better than he has for Everton so far?

All that matters for now is that Kean has a good game against Armenia on Tuesday evening for Italy’s U21s and returns to Merseyside full of confidence.

The rest can be dealt with later, if it ever needs to be.