Antonio Rüdiger will be out of contract at Chelsea next summer and the efforts made by the west London club to secure the star’s long-term future have yet to come to fruition.

On Wednesday, reports in the British press stated the defender’s brother, Sahr Senesie, who is also his agent, met Real Madrid officials to discuss possible terms. It was also stated the 28-year-old’s representative had a meeting with Bayern Munich last week.

Claims made in England have reached Spain, with Sport relaying it and then providing their own information on this case.

The centre-back has decided to change clubs and has rejected the renewal offer made by the Blues, which included a net annual salary of €8.5m. The report adds ‘what is clear’ is that the Germany international will ‘not continue at Chelsea’ beyond this season.

Both Los Blancos and the Bundesliga winners are mentioned. The Bavarian club are willing to pay €10m net per year salary to the former AS Roma man. Rüdiger, at the peak of his career, ‘aspires to something more’. 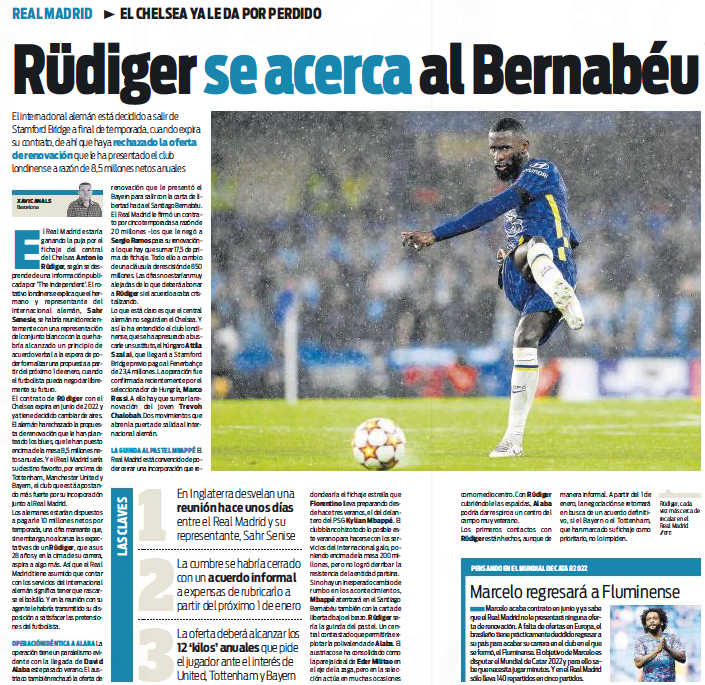 The newspaper adds the La Liga giants ‘would be his favourite destination’. With Bayern’s €10m net per year offer not enough to convince Thomas Tuchel’s man, Real Madrid must ‘scratch their pocket’ to secure his services.

During the meeting with the agent, Carlo Ancelotti’s side have conveyed their willingness to meet Rüdiger’s demands.

Real Madrid signed David Alaba on a free transfer in the last window. He signed a five-year deal worth €20m per season and €17.5m as signing on bonuses.

If they want to sign Rüdiger, Sport say the figures they have to offer him will not be ‘very far’ from what they have proposed to the Austrian.

Carlo Ancelotti’s side plan to resume negotiations with the Chelsea player’s camp from next month, hoping to find a ‘definitive agreement’.