The 32 year old will become a free agent at the end of the season as he’s yet to sign an extension with the Reds. Subsequently the Super Lig club can now enter into talks with the player with regards to a pre-contract agreement.

Fotomac claim Trabzonspor board are on a transfer mission once again as they want to sign another Liverpool player on a free transfer after they took Daniel Sturridge last summer.

They’re in the market for a central midfielder this summer, with captain Jose Sosa yet to reach an agreement over a new contract. 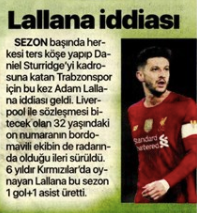 Lallana is said to have suitors from the Premier League but Fotomac report Trabzonspor are prepared to fight to convince him over a move to Turkey.

This season, the former Southampton man has made 21 appearances for Liverpool in all competitions, scoring one goal.