It’s again time for Serie A giants AC Milan to be included in the list of pretenders for Celtic defender Kristoffer Ajer.

Besides Fiorentina’s Nikola Milenkovic and Paris Saint Germain’s Tanguy Kouassi, Milan have also included the Celtic 22-year-old in their list.

There are not a lot of details on the chase for Ajer. All Tuttosport says is that he’s a defender who’s only played at a high level for Celtic, so should be carefully inserted in Serie A. They don’t rely fully on his experience in the Scottish Premiership. 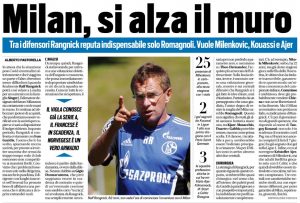 Ajer has started in nearly all of Celtic’s games this season, and his level has been drawing attention from several European sides. Today, claims from Spain have been linking him to Atletico Madrid and Real Madrid as well.

His contract with the Glasgow side runs until 2022.