On Monday, reports emerged that AS Roma were now intent on sealing the deal for Granit Xhaka, and the Arsenal midfielder was likely to join up with his new teammates next week.

That came from Sky Sport in Italy, and it’s now been picked up by Corriere dello Sport, who explain that ‘in the next few hours, Tiago Pinto is ready to conclude the match with Arsenal’ for the Swiss player.

Currently ‘waiting for good news’ while on holiday, Xhaka has had an agreement with the Italians for a good two months.

While the Gunners are still playing hardball with their €20m request, Roma ‘have found optimism about the outcome of the negotiation for a couple of days’. 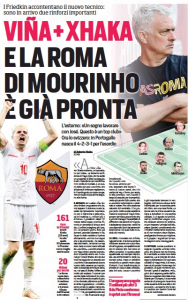 Basically, the Friedkins, chuffed at having appointed José Mourinho as their manager, ‘have decided to please the Portuguese on all fronts, as long as they can do so sustainably.

All in all, Xhaka’s exit from Arsenal to AS Roma appears closer than ever, and all that’s left is a small effort from both sides for this rather tedious saga to come to an end.

That’s what we hope for, at least.