Earlier this year, various reports from Germany explained that Arsenal are one of the clubs looking at Eintracht Frankfurt’s Evan N’Dicka.

At the end of March, Bild questioned whether the defender will continue with the German club next season or make a switch to the Emirates in the summer.

This week’s edition of SportBild has a short update about the 21-year-old’s situation, covering his and the Bundesliga side’s stance on a potential transfer.

Mikel Arteta’s side get a mention and it’s claimed the Gunners are ‘interested’ in the centre-back, although that’s about the only information mentioned about Arsenal in the report. 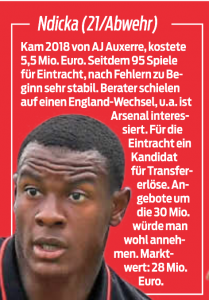 N’Dicka could be a candidate to leave his current employer this summer and the report adds the Frenchman’s advisors are looking for a move to England.

Eintracht Frankfurt, for their part, are ready to part ways with the player if they receive an offer of around €30m.

N’Dicka arrived in Frankfurt from AJ Auxerre for €5.5m in 2018 and has been a regular for Eintracht Frankfurt, making over 20 league starts each in the last three seasons.