For as long as Manchester United have needed a new centre-back, Tottenham’s Toby Alderweireld has been an option for them.

After all, the Belgian has a £25m release clause, making him an experienced yet cheap option for any interested club.

This suggests the 30-year-old will have an important choice to make in the summer, as he will undoubtedly be faced with a number of contracts to go through.

One of those, according to Corriere dello Sport, could come from Juventus, who are looking to add to their defence in the coming months, aware that Andrea Barzagli (37) and Giorgio Chiellini (34) are edging ever closer to retirement. 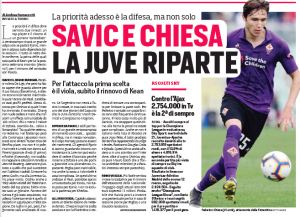 Daniele Rugani is the only sub-30 centre-back at the club, and adding Alderweireld, who only turned 30 in March, would allow them to relax, knowing they have a good option for the next three years or so.

Corriere suggest the Serie A champions are ‘keeping an eye on’ the Tottenham player’s situation, and if they miss out on, let’s say, Kostas Manolas (who already knows the league), they could provide Manchester United and co. with tough competition.