The Black Eagles are in the market for a striker and AMK Spor say Okaka has been identified by the Besiktas scouting team.

The Turkish newspaper report the Super Lig club are looking to loan the Watford player and that they are also targeting their former player Burak Yilmaz.

Okaka was linked with a move to both Galatasaray and Bursaspor during the last summer window but the Italian took the decision to remain with Watford.

It seems the 28 year old doesn’t have a future at the Hornets under Javi Gracia, with the Spanish manager preferring the likes of Isaac Success, Gerard Deulofeu and Troy Deeney ahead of him.

There have also been recent claims Fulham are monitoring the situation with Okaka and the West London side could make a move for him in the new year.

It’s been reported Claudio Ranieri is very interested in signing his compatriot and that the attacker is also looking to leave Watford. 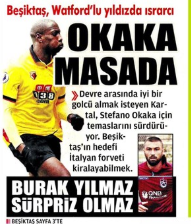