Newcastle United and Wolverhampton Wanderers looked at Boubacar Kamara, but were unsuccessful in their efforts to take him away from Marseille in the summer.

On September 1st, L’Equipe reported the midfielder decided to stay despite the late effort made, ‘especially’ by the Magpies.

These claims are relayed again in today’s edition of L’Equipe, along with a few additional bits of background information on this case.

Pablo Longoria, the president of the Ligue 1 side, ‘made no secret’ of his desire to sell the 21-year-old in the recently concluded window.

The Tyneside club, along with Sevilla and Bayern Munich, are said to have ‘followed’ the France U21 international for ‘many months’, but none of them submitted a concrete offer.

Regarding Steve Bruce’s side, the newspaper explains the French club ‘indeed had a verbal offer’ of €14m from Newcastle. However, this ‘did not satisfy’ the Marseille leaders, who were hoping to cash in around €25-30m from Kamara’s sale.

In addition to this, Kamara wasn’t in favour of making a move.

His contract runs down in 2022 and Longoria’s talks with the Frenchman’s entourage over a new deal haven’t advanced since January. 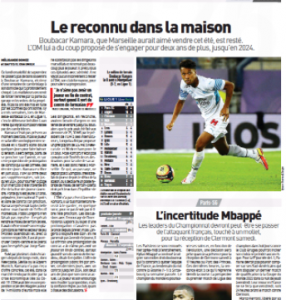 However, Longoria was clear his side will offer a new deal if there’s no sale in the summer.

The report says Kamara’s camp has received an extension offer from Marseille until 2024, and he and his entourage ‘will study the proposal’.