The 21-year-old has less than a year left on his contract, and the Magpies and Wolves proposed loan offers of €2.5m with an option to buy in 2022.

Wednesday’s edition of L’Equipe details the behind-the-scenes efforts made by the Ligue 1 side and Newcastle to transfer the midfielder.

Marseille had to offload players first before making new additions to their squad and Duje Ćaleta-Car was the main candidate to leave the club.

There were no offers until Monday for the France U21 international, but Longoria tried to ‘speed things up’ with Newcastle and Wolves. 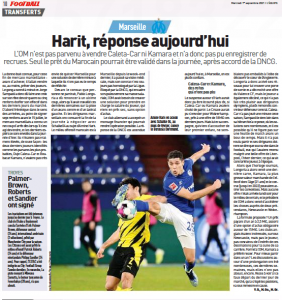 L’Equipe say the formula proposed was a season-long loan deal worth €2.5m, with a compulsory purchase option set at €15m.

Despite the efforts made by Longoria and Newcastle, Kamara was ‘not convinced’ to join the Magpies [or Wolves] and ‘preferred to stay’ at Marseille.