Giuseppe Marotta, the Italian club’s CEO, insisted over the weekend that Inter won’t keep any player who is keen to leave the club, and the media closest to Inter have taken that as a sure sign of a transfer happening.

That could come around as quickly as January, meaning Eriksen will have only spent a year at the Serie A club since his move from Tottenham. First, Inter need an offer, and Arsenal once again get a mention.

With Antonio Conte’s side either wanting an ‘important offer’ or an ‘attractive proposal’ on a swap deal, Arsenal and PSG are wheeled out. At the Gunners it’s Granit Xhaka who could be used in a swap deal, and at the French club it’s Leandro Paredes.

That feels more like Inter hope than expectation, and it appears to be the best intermediaries have come up with so far. Given Eriksen’s loss of prominence towards the 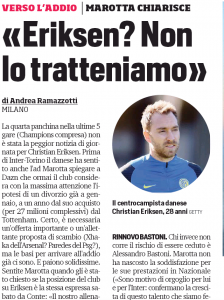 end of his Spurs career, and his troubles in Italian football, it feels unlikely Arsenal would bet big on the player even as part of a deal involving someone else.

Much more likely is clubs being interested in a loan deal, with a purchase option.

Regardless, Corriere dello Sport say the ‘foundations are already there’ for a transfer.