Home Europe “He has the potential” – U21 national manager raves about Man City...
SHARE

Manchester City loanee Pedro Porro has managed to have a great adaption to Portuguese side Sporting, where he’s started in all of their nine matches this season.

That makes the fullback one of the Lions’ greatest signings this summer, and newspaper Record features a big story about him today.

The outlet managed to interview Spain’s U21 manager Luis De La Fuente, who’s been with Porro during the international break, and talked a little about the potential the player has to grow with the national team. 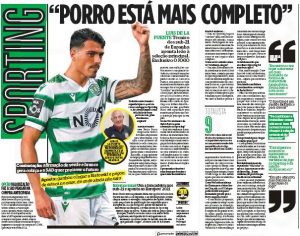 Manchester City spent €12m to sign Porro from Girona in 2019. He first had a season-long loan at Real Valladolid, and is now spending a year in Portugal.

On the move to Manchester City, De La Fuente said: “He’s a prepared kid, over time and through his training process, to take on great challenges and high level demands. Maybe when he went to Manchester City… He was from a small town, he felt the change of city and club, of demands.

“Then he went to Valladolid and these changes tend to decentralise players. There’s an adaptation period and it costs. But now he has succeeded, he can focus and it’s paying off. With this experience you can mature. He’s motivated and a more accomplished footballer, with clearer ideas of what he wants. He’s more complete.”

And when asked about the loan at Sporting, the coach said: “Yes, a good option. The best thing is to see him happy and enjoying, and he’s growing as a footballer… I hope he continues to improve.”

O Jogo writes that with Porro’s good start at Sporting, he’s starting to draw the attention from other clubs, and the Lions are already thinking of protecting themselves from losing the player. The deal includes a buying option for €8.5m, and considering his first months at the club, it’s very likely the clause will be triggered.