Home Europe Club ‘greedy’ as West Ham ‘did everything’ to try and get signing...
SHARE

At several points on October 5th, Mohamed Simakan was expected to become an AC Milan player before deadline day was over.

It would have been a huge move for the defender, swapping Strasbourg for the Italian giants, who are currently top of Serie A after winning all four matches played. However, everything collapsed, with no agreement finalised when Italy’s window closed at 8pm.

After the Italian window had ended, L’Equipe reported West Ham had pushed €17m forward for the player, the same as what Milan’s final offer had been.

Strasbourg were said to be looking for €20m, and West Ham had very little time to decide whether to match that. In the end, the Hammers appeared to move on.

However, this week’s edition of France Football says they did get to the €20m figure… sort of. Having initially offered €15m plus €5m in bonus payments, West Ham are said to have 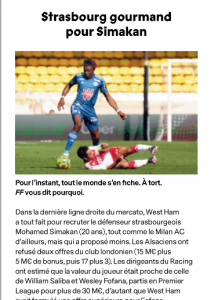 That still wasn’t enough, with France Football stating Strasbourg were ‘greedy’ and had managed to convince themselves €30m+ was the fair price.