It’s with some bitterness that Portuguese newspaper A Bola writes that Sporting may miss out on the signing of Islam Slimani from Leicester City this summer.

The outlet starts by claiming that the Lions ‘opened doors’ for the player in Europe, and he’s always talking about them with great affection.

But although his return to Alvalade ‘seemed imminent’, the striker is apparently taking a bigger offer from a French club instead.

A Bola claims that Sporting had a ‘nearly done’ deal with Leicester City, as they had found an agreement for the move. But when the Lions got in touch with the player, they heard about this bid from France. 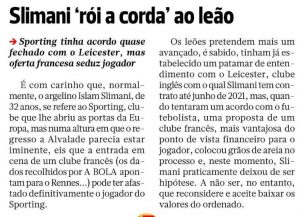 They say he’s being offered a ‘more advantageous offer from the financial point of view’. And according to A Bola’s sources, this club are Rennes.

This, however, seems dubious considering there was a recent article in France Football claiming the Ligue 1 side had decided to drop their interest in the player when Amiens SC accepted their bid for Sehrou Guirassy.

Either way, it’s claimed that Slimani’s return to Sporting seems unlikely at this stage, unless he accepts a lower salary at the Lisbon side.

The striker’s contract with Leicester City expires in 2021.