One of the big question marks at Leicester City this summer has been the future of Islam Slimani.

The forward, who spent last season on loan at AS Monaco, doesn’t appear to be in Brendan Rodgers’ plans at King Power Stadium, and a move away in the current transfer window makes the most sense for everyone.

And, if France Football are to be believed, it came very close to happening, with Stade Rennais coming forward and starting serious talks for a transfer.

However, it all collapsed at the last minute because of one phone call.

The French magazine explain Rennes were ‘very interested’ by the Algeria international’s profile, and the Ligue 1 side had started talks, offering €5m for the last year of his contract while Leicester wanted €7m.

As France Football say, that wasn’t exactly a huge difference to overcome, and they’d even agreed for the player to hold contract talks, with a three-year deal being negotiated.

It even went as far as Slimani chatting with Rennes’ manager, Julien Stéphan, which is when it all came crumbling down. 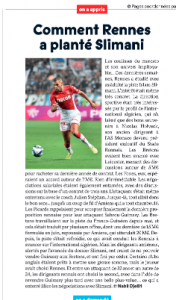 The reason for that was Amiens ringing their league rivals to let them know they were ready to accept their bid for Sehrou Guirassy.

Having offered €15m, Rennes refused to go any higher, but the bid was initially met with reluctance by his club, who wanted €20m.

However, ‘alerted by the advanced talks with Slimani’, Amiens decided to pick up the phone and ‘concede’ to selling their star for the aforementioned amount.

While ‘certain English clubs were ready to offer a big sum, the player had chosen Rennes’.

At that point, choosing between a 24-year-old with resale value and Islam Slimani, a 32-year-old, was a no brainer for the Ligue 1 club, and they moved on from the talks with Leicester.