Joao Moutinho could be set for a return to former club Porto after his contract with Wolverhampton Wanderers came to an end.

That’s according to Jornal do Noticias, who say the Portuguese side are interested in a deal as they look for a replacement for Vitinha.

Moutinho is available on a free transfer after his deal with Wolves came to an end, with talks over a renewal falling by the wayside after the 35-year-old demanded a two-year extension. 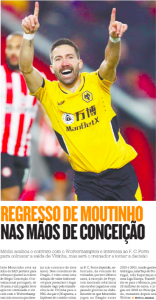 Thus is he now a free agent, and those in charge at Porto see him as an ‘indisputable’ option to replace Vitinha after he joined Paris Saint Germain.

Moutinho’s potential return depends entirely on manager Sérgio Conceição giving his approval to the deal, something he may not do, having shown a ‘reluctance’ to sign former players in recent years.

That could see him refuse to sign the former Wolves man, who spent three years with Porto earlier in his career, winning three league titles, a Taça de Portugal, three Supercups and a Europa League before a move to Monaco.