Chelsea are expected to ‘re-launch’ their bid for Juventus star Mathijs de Ligt next week, while Manchester United are yet to make a bid.

That’s according to Gazzetta Dello Sport, who say Juventus are awaiting developments around the Dutchman as they plan more of their own incoming business.

The newspaper explains that Juventus are eyeing a move for Roma star Nicolo Zaniolo, and contacts between the two clubs are underway to make a deal happen.

However, while an agreement with the player is a formality, finding one with Roma is an altogether different prospect. They need money to do so, and that could come from the sale of De Ligt.

He has suitors around Europe, including Chelsea, who are reportedly keen on him as they are trying to find replacements for Antonio Rudiger and Andreas Christensen.

Efforts have already been made to make a deal happen, and Gazzetta now say Juventus are waiting for an ‘evolution’ in the possible transfer. 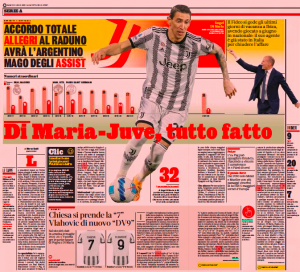 Indeed, according to their information, a ‘re-launch’ from Chelsea is ‘expected’ next week as they look to reinforce Thomas Tuchel’s squad.

Any suggestion of a move from Manchester United are wide of the mark for the time being, though, with no offers having arrived from Old Trafford at this moment in time.

Of course, that can always change, particularly with Erik ten Hag seemingly getting the Ajax band back together this summer. Manchester United’s focus at the moment, though, seems to be on Lisandro Martinez.

That leaves Chelsea with something of a free run on De Ligt, and Juventus are very much expecting a new effort to be made next week.