Ever since January, and maybe even before, AS Roma have been linked with Aston Villa’s Douglas Luiz, with José Mourinho highlighting him as midfield reinforcement target.

However, the asking price put in place by Steven Gerrard’s side has deterred them to date, regardless of the fact it has been made clear the Brazilian wants to leave and has no intention of renewing.

Now there’s a new team on the scene, with Milan meeting with the player’s agents on Thursday.

We covered a brief report on the matter at the time, but Gazzetta dello Sport have a bit more in their Friday edition.

It’s made very clear the Aston Villa midfielder’s name ‘has entered the roster of potential reinforcements’ at San Siro, and a potential deal was brought up in the Thursday meeting, described as ‘an exploratory interview that could have a sequel’.

Still just 24 years of age, his contract at Villa Park expires next summer, meaning that while the Premier League side estimate his value at €30m, the situation ‘could push the Birmingham club to lower their demands’. 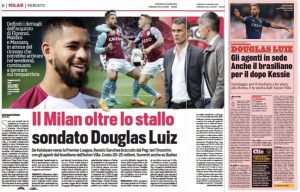 This is what Roma were hoping for, and could be the one Milan follow going forward, which is backed up by Corriere dello Sport.

Luiz, in their eyes, ‘can become a viable alternative in the midfield over the next few days’ if they fail to attract their prime target, Renato Sanches.

They believe he would cost €20-25m, compared to the aforementioned €30m, and the fact he wants to play Champions League football works in Milan’s favour.

Something to keep an eye on.