As you’ll know, because Steven Gerrard talked about it in the past, Douglas Luiz has yet to renew his contract at Aston Villa.

The Brazilian, who remained a first-team player at Villa Park last season, is contractually tied to the club until June of next year, after which he would become a free agent.

This is something Aston Villa will want to avoid, and if they can’t get him to sign a new extended deal, then selling him this summer makes the most sense.

The situation is one AS Roma are following very closely, long interested in Luiz’s services, and they could make a move for him if the midfielder pushes for an exit. 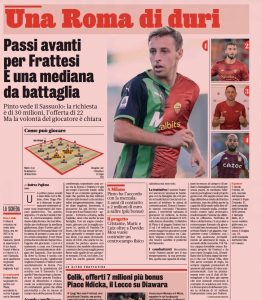 Gazzetta dello Sport on Thursday seem to suggest this is something that has already started, as they point out the player has ‘practically broken up’ with the Midlands club, and ‘has already made it known that he doesn’t intend to renew’.

On Wednesday, it was claimed that Aston Villa were asking for €35m, but Gazzetta reckon that currently stands at €30m.

Either way, it’s too much for Roma, who ‘hope to lower the request’.