After the ‘news’ that Barcelona were interested in bringing in back Gerard Deulofeu from Everton, Napoli’s interest had disappeared from the Italian papers.

The Catalan club made it public they were thinking about it, but with the player seemingly preferring a stay in Italy where he has done well on loan at AC Milan, he is very likely to turn down the opportunity to return home. 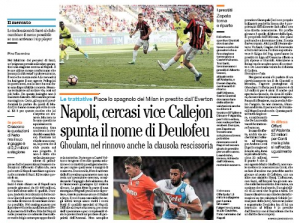 Helping his temporary club qualify for the Europa League qualifiers next season, the Everton loanee has made a name for himself in Italy, causing Napoli to keep an eye on him.

Monday’s edition of Il Mattino explain the young Spaniard is back on Aurelio de Laurentiis’ radar, with the newspaper hinting he would be their number one target to add to their dynamic frontline next season.

Listing Patrik Schick and Diego Simeone’s son as alternatives, the Italian outlet explain Napoli are ‘especially’ thinking about Deulofeu for the role.

Over the weekend, we covered the situation from Milan’s perspective, with Gazzetta claiming AC Milan would wait until Everton presented ‘reasonable terms’ for the player and were looking at other players for the role just in case that didn’t happen.

It seems this dilly-dallying from their Italian rivals has opened a door for Napoli, who will be playing in the Champions League next season in some shape or form.

However, while he would probably be a starter in Milan, that might not be the case in Naples, with the trio of Insigne, Mertens and Callejon the likely starters next season.