It’s safe to say that Lucas Torreira’s loan at Fiorentina from Arsenal is going completely differently from the spell he had at Atletico Madrid.

When spending a season in Spain, the midfielder could never hold a starting spot in the team, and that’s why his permanent transfer from Arsenal was not even considered.

Now at La Viola, where he has ended up being an important player, there’s no doubt the club will try to keep him for longer, and it seems the talks with the Gunners are happening.

As newspaper Corriere Dello Sport writes about a few Fiorentina players today, they claim that to secure Torreira’s permanent transfer from Arsenal, the ‘parties have already begun to meet’. 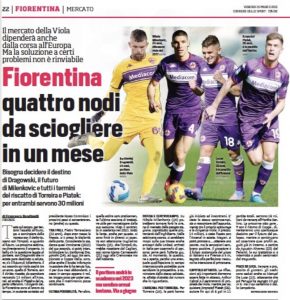 Given the midfielder’s positive spell at the club, it’s said the Italian side don’t intend to ‘deprive’ themselves of the player and now work to keep him, having previously agreed a €15m option to buy.

As has been reported many times elsewhere, they add La Viola could even work to get a discount from the Gunners, and ‘the feelings seem positive’ regarding his stay in Florence.