Atlético Madrid’s search for a new No.9 has seen them set their sights on Arsenal’s Alexandre Lacazette, reports Marca on Wednesday.

It’s claimed the 29-year-old isn’t the first-choice target for the La Liga side, but the possibility of signing him in a swap deal ‘motivates’ Los Rojiblancos.

Diego Simeone’s side believe the Gunners want to sign Thomas Partey, but the midfielder’s name will not be proposed as part of the deal.

According to the report, the Spanish club are willing to offer Thomas Lemar, Ángel Correa or Vitolo as makeweight to land the Frenchman.

Marca explain it doesn’t seem like a ‘simple negotiation’, considering Arsenal turned down an exchange proposal in the winter market.

However, the circumstances and needs of both clubs have changed since then, and it could lead to fresh talks. 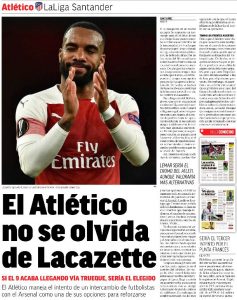 Arsenal took Lacazette from Lyon in 2017, and prior to joining the north London club, the player had a verbal agreement with Atlético.

He couldn’t join Simeone’s side because they were banned from making new signings that summer.

The newspaper now claims the Madrid based club haven’t forgot Lacazette, but they can only sign him this summer via an exchange operation.