On August 25th, we relayed news from Spain that Leeds United’s Rafa Mújica is edging closer to joining Real Oviedo on a loan deal.

Today’s edition of AS explains the Whites forward, along with Inter Milan’s Gabriel Brazão and Atlético Madrid’s Cedric Teguia, is set to seal a move to the La Liga 2 side.

It’s claimed the Segunda División club should complete the loan deals for the aforementioned players in the ‘next few hours’.

Cope explain the Spanish side plan to bet on players who will have little impact on their salary budget. They are looking at ‘low cost operations’ this summer.

Oviedo have decided to take on Mújica, Gabrile and Cedric, and the trio’s ‘moderate’ wages have been a crucial factor in their impending arrivals.

According to the claims, Marcelo Bielsa’s side, Inter and Atlético have collaborated with Oviedo when it comes to dealing with the trio’s salaries. This would suggest Leeds will pay part of Mújica’s wages whilst he’s out on loan.

This will help the Spanish club financially and also gives them more room to make other key additions to the squad. 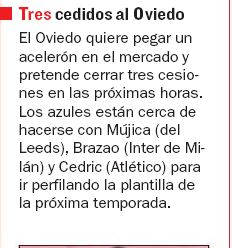 Mújica spent the first half of 2019/20 season on loan at Extremadura. Cope state Oviedo are of the belief he needs a ‘maturing process’.

He failed to have regular minutes with Extremadura and that’s because Mújica lacked ‘competitive character’.