Hurrah! Florence newspaper La Nazione have finally woken up to the fact that Leicester City own Dennis Praet.

In several reports this week, both online and in their newspaper, La Nazione reported Praet is only on loan at the Foxes from Sampdoria, and they claimed he’d already informed the Genoa club he wasn’t happy with how the season was going for him.

That they couldn’t get the player’s ownership correct obviously threw a lot of doubt on the story, however, La Nazione are close to Fiorentina and the claim of interest may well be correct.

In their Friday edition, the newspaper reports La Viola are in ‘constant contact’ with the Premier League club about potentially signing Praet in the winter market. Fiorentina would hope to take the Belgian on loan, and then have a right to make the move permanent next summer. 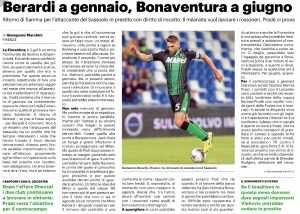 However, it’s made very clear that the ‘final word’ will go to Leicester City manager Brendan Rodgers.

Given Praet is a used part of the squad, it’s got to be unlikely Rodgers would sanction his exit unless there’s unrest behind the scenes.