Feyenoord chief Frank Arnesen has admitted it will be ‘almost impossible’ for them to keep Arsenal loanee Reiss Nelson, at the club next season.

The winger has been with the Dutch side since the summer when Arsenal elected to ship him out for the regular game time that wasn’t on offer at the Emirates.

After a rocky start at the club, he established himself as something of a key player towards the end of the season, and Feyenoord had made it clear they’d like to keep him if possible.

There was a growing feeling that could happen, and last week, we even covered a report stating Feyenoord had made an offer to Arsenal for another loan deal.

It seems they’re set to give up their hopes, though, with Algemeen Dagblad reporting that a return to Arsenal ‘seems obvious’ at this point. 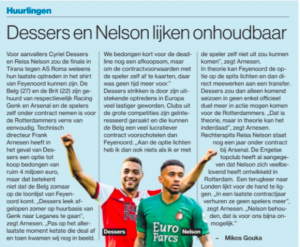 This is reportedly because Arsenal have ‘already indicated that Nelson has developed very promisingly in Rotterdam.’ In other words, they’d like to take another look at him in the summer.

That, coupled with his contract situation, seems to suggest he won’t be going out on loan again, with the Gunners instead calling him back before deciding on whether to offer a new deal or move him on.