Sporting Lisbon will not be taking up their option on Everton winger Yannick Bolasie but would be interested in another loan deal.

Bolasie joined Sporting on loan from Everton in the summer transfer window, with the Portuguese side having an option to make it permanent for €4.5m.

He made a positive start to life with them, and it seemed they may be keen on taking up that option come the end of the campaign.

However, his time at the club has soured somewhat over the last few months, so much so that it is now clear they will not be buying him permanently.

Indeed, last week we covered claims that it was because they didn’t like him, but according to A Bola, that’s not the case.

The newspaper states that while Sporting are not interested in paying for Bolasie, they would be happy to take him on loan for another season.

It’s explained that while Bolasie hasn’t shone, there are other aspects he brings to the side and thus they are happy to keep hold of him. 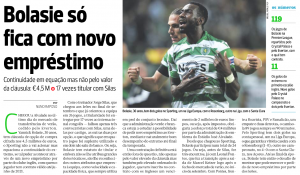 However, Sporting don’t have the finances for a permanent deal, with the €4.5m buying clause and Bolasie’s salary, which would be €4m, both out of their reach.

Whether Everton would be willing to sanction another loan deal isn’t mentioned, although it seems unlikely they would given how they are planning to overhaul the squad this summer.

However, if there are no other options, there is every chance they may sanction a departure to get Bolasie’s wages off the books for the final year of his deal.