Last summer, Illan Meslier joined Leeds United on a season-long loan deal from FC Lorient and the Championship side retain an option to make his transfer permanent for €6m.

Earlier in February, Ouest-France reported the Whites will be forced to exercise the option to sign the keeper if he makes 10 appearances and Leeds are promoted to the Premier League.

It was also explained the 20-year-old has no future at the French club.

The goalkeeper has made three appearances so far and two of them came after Kiko Casilla was suspended by the FA.

The 2019/20 season in France has ended and Lorient have been promoted to Ligue 1.

Today’s edition of Ouest-France takes a look at the Ligue 2 winners’ transfer plans for the upcoming window and they provide a short update on Meslier. 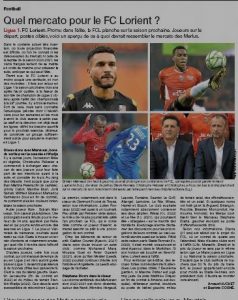 It’s claimed the goalkeeper could ‘continue to write his story in England’ as Lorient are of the belief that Marcelo Bielsa’s side ‘plan to buy’ him in the summer.

If Leeds decide against extending Meslier’s stay at Elland Road, the player will then have to find another club in the summer, because there seems little chance of a return to Lorient.