João Félix’s departure from Benfica is set to be sorted this week, according to the Portuguese media. Newspaper Record brings a story today saying that with the end of the Nations League, the process should be resumed today and soon come to an ending.

Record writes the Eagles can no longer fight for his permanence, not only because of the bids, but also because of his salary, since Manchester City offered him €6m per season on a five-year contract. Benfica can’t doing anything like that.

Now president Luis Felipe Vieira is set to pick the best offer, preferably one that allows the 19-year-old to stay in Lisbon for one more season.

Record claims that Benfica currently have four offers for Félix. Two of them get to the €120m release clause, and only one allows the Eagles to have the player for another year. 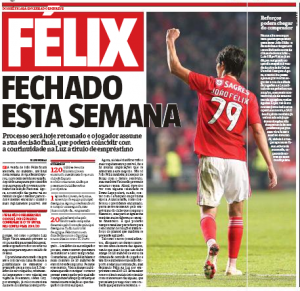 This time, Record doesn’t say where the offers are coming from, although we’ve read many times that both Manchester City and Manchester United are two of these clubs.

Newspaper A Bola brings a similar story, saying Jorge Mendes is now set to sit with Vieira and decide the best option. This is another story which only names Manchester City in the race.

A Bola writes that Félix wants to go on vacation with his future sorted, so perhaps it’s finally time to get things done.

Club planning ‘market in synergy’ with Watford – Eyeing up two...