The Portuguese press doesn’t really have big updates on the Bruno Fernandes saga today. But they do agree on one thing: it’s Tottenham Hotspur who are leading the race for the midfielder.

As we covered this morning, Spurs midfielder Eric Dier has spoken to O Jogo, explaining he thinks Bruno is a good player but refusing to discuss a transfer.

O Jogo adds that Tottenham have already reached the €70m demanded by Sporting, and by doing that, they’ve surpassed both Manchester clubs in the race.

However, O Jogo doesn’t expand on why no further step has been taken, and doesn’t say what Sporting are waiting for before accepting this bid. 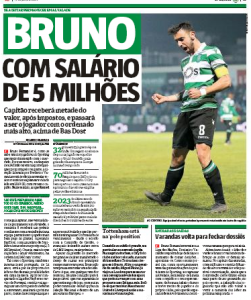 Newspaper Record brings a weird one. They say Sporting are preparing themselves for any scenario, even one where Bruno would stay at the club, and that’s why they would pay him a salary of €5m per season, the biggest in the squad.

However, they say Tottenham are in ‘pole position’, with Fernandes’ agent Miguel Pinho travelling to London last week to speak to Spurs. They also say that a bid could be made in case Christian Eriksen leaves the club this summer, which is a bit of an anticlimax at this stage of the chase.

Record adds that Manchester United and Liverpool are ‘attentive to the moves’, but it doesn’t look like the two clubs have been doing much.