Clement Lenglet to Manchester United is a painting by numbers transfer rumour and the only surprise is it hasn’t been pushed before.

Jose Mourinho praised the Sevilla team after his side lost to them in the Champions League, saying several could get in his side. Manchester United were then linked with Barcelona’s Samuel Umtiti, the Catalan club were in turn linked with Lenglet, who was presented as something of a bargain, so Lenglet to United was the obvious next step.

From what we can see this started in an English tabloid, but it’s made its way to Spain. Catalan newspaper Sport say Mourinho is very keen on the player and Manchester United are the latest club to join the race.

‘Manchester United offers a very attractive sport and economic proposal’ states Sport, but it’s made very clear if Barcelona push forward firmly in their move then Lenglet will be off to the Camp Nou.

Of course, the Catalan media believe every player on the planet, openly or secretly, desires a move to Barcelona, so they’re always going to state their local club as a preference to Manchester United. 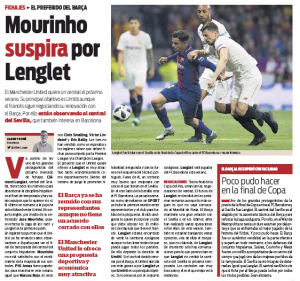 Very much the man of the moment in the La Liga rumour mill, perhaps 22 year old Lenglet is a little on the young side for Mourinho.

He may just be getting himself another Victor Lindelof, a defender with potential but one the manager doesn’t trust enough yet.

Depending on who one believes in Spain, Lenglet has a buyout clause ranging from €30m to €35m.