Mikel Arteta has publicly expressed his desire to retain Martin Ødegaard at Arsenal on multiple occasions, when he was still on loan at the Emirates.

The Gunners manager has a big desire to land the 22-year-old and the new development at the Bernabéu would hint an exit may be on the cards for the player.

Ødegaard was wearing No.21 shirt at Real Madrid last season, but he’s lost that number to Rodrygo, as per La Liga’s official website.

The midfielder hasn’t made it to the list ahead of the weekend tie against Alavés, and AS view it as ‘one more clue’ he’s on the exit ramp.

An earlier report from AS explained Arteta ‘will do everything possible’ to sign the Norway international and the newspaper relays claims made in England about Arsenal wanting to sign him.

Along with Ødegaard, Dani Ceballos is not included in Real Madrid’s squad on La Liga’s website.

Ceballos is currently sidelined with an injury, but the report states his omission may be taken as a hint even he could leave Los Blancos.

Real Madrid have ‘awarded 24 numbers provisionally, waiting for the final one’. ‘Only 25 remains free’ and there are two candidates, Ødegaard and Dani Ceballos, and ‘everything indicates’ one of them will leave Carlo Ancelotti’s side this summer.

Raphaël Varane has made it to the list, but AS suggest Jesús Vallejo will take his place in the squad. 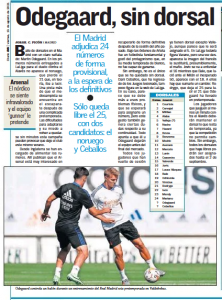 AS state: ‘Players who play at least one minute against Alavés must keep the number for the remainder of the season, since the competition does not allow changes. However, all free bibs may be assigned until 2 September’.

Real Madrid not giving Ødegaard last season’s number could be a ‘clear signal’ his future is away from Real Madrid.

This report may come as encouragement for Arsenal, who maintain serious interest in the Norwegian.