Claudio Ranieri has admitted it still gives him ‘great satisfaction’ that people in England talk about Leicester City’s title win.

Ranieri famously led Leicester to their first-ever Premier League title in 2016, a feat that went completely against the odds.

Having arrived in the summer amid much scepticism and plenty of criticism, Ranieri led his side on a sensational campaign that saw them end the season ten points clear at the top.

It was a remarkable achievement, with Leicester having been rated at 5000-1 at the beginning of the season to win the league and plenty predicting them to stumble throughout the year. 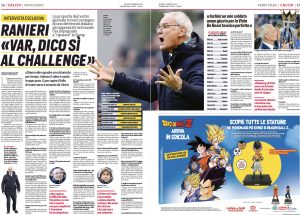 Instead, they became the first team since Blackburn Rovers to have broken up the title monopoly, which has been shared by the ‘top six’ of Manchester United, Arsenal, Chelsea and Manchester City since Rovers’ success in 1995.

Four years on Leicester’s title win is still talked about worldwide, with surprise title bids now referred to as ‘doing a Leicester’, something Ranieri admits pleases him.

“Winning a Scudetto with the team I’ve always rooted for would have been special, but I’m not complaining about my career,” he told Corriere dello Sport.

“It was given back to me with the business in the Premier League with Leicester. The fact that they still talk about that title in England is a great satisfaction.”