Xavi Hernandez returning to Barcelona as manager has seen an avalanche of rumours related to the Catalan club and transfers.

The claims are never-ending, and whilst some may have been plucked from thin air, others could be the result of agents and associates working in the background.

Sunday’s back page of Mundo Deportivo links Chelsea’s Marcos Alonso with a move to the Camp Nou. The claim states that after signing Dani Alves, and therefore providing competition for the right-back position, Barcelona would like to do similar at left-back.

That’s where Alonso comes in.

It’s stated the Chelsea player is a ‘recognised culé follower’, meaning he’s a fan of the club, and his family connections with Barcelona are explained. His father, Marcos Alonso Peña, played for them during his career, breaking the Spanish transfer record when he moved to Barcelona from Atletico Madrid in 1982. 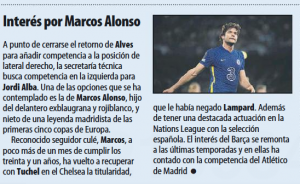 Alonso is being considered as a potential signing, yet Chelsea would obviously have a big say in whatever happens.

The 30-year-old has a contract at Stamford Bridge which lasts until June 2023, so Thomas Tuchel’s plans for him will be the deciding factor.