Bristol City should keep Pedro Pereira at the club for the next season, according to reports from Portugal today.

Newspaper A Bola features a story where they name three players whose situation are being sorted by Benfica this week.

One of them is Pedro Pereira, who spent the last season having a spell at the Championship side.

A Bola writes that he should indeed go back to Bristol, as the Eagles are set close a deal for the 22-year-old before the end of the week.

It’s claimed that he will head back to the Robins on a new loan, and there’s no information on a potential buying option for the English club for now. 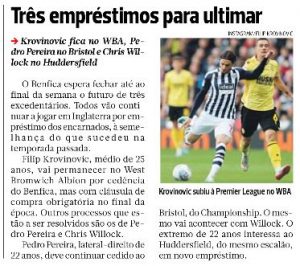 Pedro Pereira made 22 appearances for Bristol City last season, and was mostly a rotation player.

His contract with Benfica expires in 2022, and Transfermarkt currently value him at €1.8m.

Since this will be his third consecutive loan spell, Benfica should probably let him go on a permanent deal next summer.