After month and months of reports claiming Inter were the ones strongly attempting to sign Emerson Palmieri from Inter, it’s now Napoli who appear to be leading the pack.

This comes amid rumours the club are trying to find an answer to their expensive Faouzi Ghoulam problem, as the Algeria international is looking to free himself from his contract to head to Wolverhampton Wanderers.

Should he do that, Corriere del Mezzogiorno are reporting it would then ‘unblock the search for a left-back’ with Napoli already ‘insisting for Emerson Palmieri from Chelsea’.

Their idea would be to bring him in on a ‘loan with a view to buy’, which is exactly the same kind of deal Inter were trying to pull off. 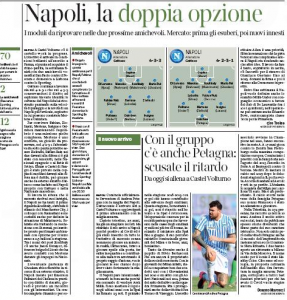 That never materialised, and there’s no guarantees it will for Napoli either, but the local newspaper do state ‘a meeting is planned with the intermediaries on Thursday’.

It seems we’ll have to wait until at least Thursday evening or Friday to find a bit more on this unless something dramatic happens in the meantime.