Back when a bunch of Sporting hooligans attacked the club’s own Alcochete training centre, physically assaulting players and staff, there were some in Portugal quick to point the finger at Bruno de Carvalho.

This was somewhat understandable. ‘Madcap’ doesn’t come close to doing Bruno justice. The man-child former Sporting president had been in a very public war of words against his own squad. With Sporting faltering, and Bruno doing his best to escape any blame, he continually pointed the finger at senior players, and it clearly included Rui Patricio.

Understandably, the now Wolves goalkeeper fell out with Bruno, who didn’t take it very well. As the legal process rumbles on into the training ground attacks, an incident 10 days earlier has been brought in as part of the proceedings.

Sporting were facing Benfica, and shortly before the match kicked off, Bruno went to speak with the ultra fans behind Rui Patricio’s goal. This has all been documented on camera. 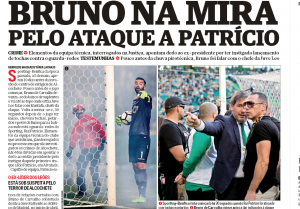 Then, 30 seconds after the game started, abuse, firecrackers, smoke bombs and other missiles rained down on Patricio’s goal area… from people supposed to be his own fans.

This has received some coverage from Correio de Manha in Portugal this week, and won’t help Sporting when trying squeeze every penny they can out of Wolves.

That’s because it gives further grounds to Patricio rescinding his contract with ‘just cause’.