Aksam claim Galatasaray manager Fatih Terim has identified Manchester City’s Fabian Delph as a primary target and they believe the midfielder is likely to join the Turkish side during this transfer window.

Last year Galatasaray had a midfield partnership of Badou Ndiaye and Fernando but neither player is expected to be with the Super Lig side next season. Ndiaye has returned to Stoke City after his loan spell with Gala, and Fernando is in talks with Sevilla.

Subsequently, Gala are looking to replace these two players and Aksam say Delph is high on their short-list.

The 29 year old wants to be a part of Gareth Southgate’s Euro 2020 squad and reportedly believes playing regular first-team football with Galatasaray in the Champions League will help him. 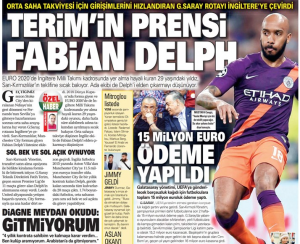 Delph has been something of a utility player for Pep Guardiola, and the assumption is that signings brought in this summer will see him leave.

He’s under contract with the Premier League champions until June 2020.