It’s fair to say that, so far, Chelsea have been the busiest Premier League club on the 2020 summer transfer market.

Unable to buy players last summer, Frank Lampard and co. waited until after the January transfer window to announce the future transfer of Hakim Ziyech from Ajax before then making a move for RB Leipzig’s Timo Werner.

But that isn’t it, as recent reports from France suggested the Blues have also targeted Sergej Milinković-Savić, currently contracted to Lazio.

It was said Chelsea had ‘initiated contacts’ with the player’s representatives, and were being helped by Claude Makélélé, currently working as an advisor to those in charge at Stamford Bridge. 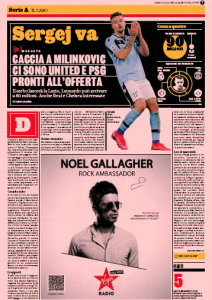 Well, now we have Gazzetta dello Sport who say the Premier League side and Real Madrid have ‘started to move’ on Milinković-Savić, providing competition for both Paris Saint-Germain and Manchester United, and the ‘next weeks will be decisive’ to ‘measure the temperature of Sergej and his entourage’.

As for the price, the €100m valuation from two years ago ‘is no longer relevant’, meaning it will have dropped.

A lot could rest on the player, who may want to discover the Champions League with his current club next year, but we doubt convincing Lazio will be an easy task in itself in the first place.