After enduring a difficult debut season at Barcelona, Miralem Pjanić is considering leaving the Camp Nou this summer.

On May 24th, both Sport and Mundo Deportivo reported the 31-year-old has several offers to change clubs and this includes a proposal from Chelsea.

Thursday’s edition of Sport now states the former Juventus man’s ‘future is far away’ from the Catalan club.

The Bosnia and Herzegovina international’s failure to have prominence under Ronald Koeman has convinced him to look for a new club.

Talks between the midfielder’s environment and Barca have already started, and it’s ‘evident the two parties are looking for a solution’, more so if Koeman is still at the Camp Nou next season.

Pjanić has a market in England and the Blues get a mention. It’s claimed Chelsea have ‘sounded out’ the player for the summer, but he doesn’t want to join them.

He wants to move back to Italy, and the option that ‘seduces’ him the most is to return to Juventus, where Massimiliano Allegri has been reappointed as the Turin club’s manager. 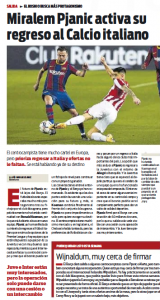 also be an option for Inter Milan, if they decide to cut ties with some of their midfielders.

Barcelona value him around €60m and they would either look to sell Pjanić or use him as part of an exchange deal. Sport state Juve have ‘very interesting pieces’, without providing additional details.

Chelsea have looked at Pjanić, whose future is ‘far away from’ Barcelona. However, he isn’t in favour of joining Thomas Tuchel’s side and wants to return to Italy.