When it comes to Davide Zappacosta, Chelsea are in absolutely no rush to do anything.

That’s how Corriere dello Sport present the situation on Friday, and it all benefits AS Roma rather nicely, which is where he is currently on loan, recovering from a cruciate ligament rupture in his knee.

He’s nearly back and ready to play, but there’s unfortunately no football for him to partake in, so Chelsea, according to the newspaper, ‘seem intent on leaving him’ in Rome for another year.

They claim Zappacosta will ‘restart from Roma’, and he ‘will stay on loan next season, ready for the league’s return’. 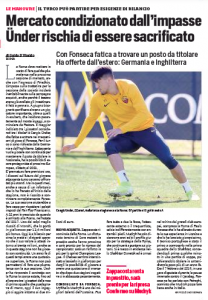 For Chelsea, this all makes sense, as they know a good campaign with the Serie A side, one where he will actually play, would help them get more money for him than if they tried to get rid of him this year after a poor season at Stamford Bridge and one out injured on loan.

The Blues originally paid £22.5m for him back in 2017, and he managed just 52 appearances over two seasons, with only 34 of those being starts.