It appears that one of the first players Chelsea could go for to strengthen their defence once Roman Abramovich is no longer their owner is Kalidou Koulibaly.

The Italian press are adamant the Blues want the Senegal international, who has one year left on his contract at Napoli and could be finally presented with a chance to test himself in the Premier League.

Corriere dello Sport have an article on the matter on Wednesday, explaining that he has an ‘initial valuation of €40m’, and his agent, Fali Ramadani, ‘was supposed to meet the club before the end of the season, but then the meeting was postponed’.

What will happen next isn’t clear, but the belief is ‘he will show up when he will be in possession of certain news and a concrete offer’. 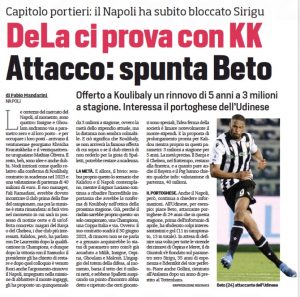 This is where Chelsea come in, desperate to replace the likes of Antonio Rüdiger and Andreas Christensen, expected to leave on frees, as both the Blues and Barcelona are labelled the ‘two most interested clubs’ in Koulibaly.

It’s pointed out the Napoli defender was offered a five year renewal by the Serie A side with a wage of €3m/season, ‘or half his current salary’, but that isn’t quite what he’s looking for right now.

Meanwhile, Barcelona and Chelsea ‘remain at the window’, with Bayern and Paris Saint-Germain also asking for information.

What they were told? ‘Starting valuation: €40m’.

Chelsea know what to do.