Eden Hazard will soon have a year left on his contract at Chelsea and has been heavily linked with a move to Real Madrid.

The front page of today’s edition of AS reads ‘Hazard considers transfer request’, but there is a condition for it.

Within the story, it’s explained that handing in a ‘transfer request’ is not a priority for the 28-year-old but his environment has so far not rejected this possibility.

Those close to the negotiation have told AS there seems to be a certain nervousness because Marina Granovskaia still remains adamant the club’s star will not be sold for less than €100m. 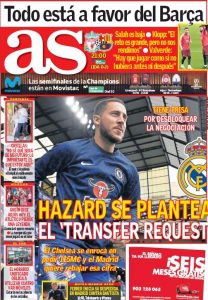 Earlier reports in Spain and England suggested the Blues will demand €115m to part ways with the Belgium international in the summer.

Should the two clubs fail to find an agreement over a transfer fee, Hazard’s camp hasn’t ruled out the possibility of requesting a transfer to leave Stamford Bridge: ‘A player, through a formal written request, can ask his club to facilitate a sale.’

It needs to be noted that AS continues stressing this option is not a priority for the attacker, but will be considered if Los Blancos and Chelsea fail to reach an agreement.

Zinedine Zidane’s side feared Granovskaia could block Hazard’s transfer and that now seems to be a reality.

Two of the three parties involved in the deal had hoped that Granovskaia would lower her demands, especially considering the Belgian’s contract expires next summer. Should Chelsea block their player’s sale, then Real Madrid will look to sign a pre-contract agreement with Hazard in January 2020 to join them on a free transfer later that year.