N’Golo Kante hasn’t had the best year, both on and off the pitch.

The Chelsea midfielder has picked up injuries which have impacted his performances and regularity, and off the pitch he’s had legal issues.

Monday’s edition of L’Equipe explains Kante’s legal action against a former agent, with the player alleging fraud, has genuinely distracted him from other things. Such a situation isn’t something Kante relishes, and he’s looking to get it all sorted out as soon as possible.

According to the French newspaper, Kante has also found stress via the Covid-19 pandemic, with them saying he’s convinced himself on more than one occasion that he’s picked the virus up.

On top of all of this was an approach from Inter Milan a couple of months ago, but L’Equipe don’t feel he wants to leave Chelsea. 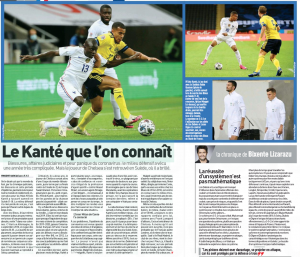 Kante’s relationship with manager Frank Lampard is described as being ‘cordial’, and he’d only push for the exit if ‘the club of his dreams’ turns up.

That club is Real Madrid, and it’s unlikely they’ll be making an effort for the Frenchman this summer.