As transfers over the past few years, Tiemoué Bakayoko to Chelsea hasn’t quite been the success story many hoped for when the Premier League club snatched the defensive midfielder from a title winning AS Monaco side.

The defensive midfielder had been a key member of Leonardo Jardim’s side, with many sides fighting over his services, but it was Roman Abramovich’s club who came out on top.

A first season under Antonio Conte resulted in mixed feelings from both fans and the club, and the arrival of Maurizio Sarri, with Bakayoko not fitting into his plans, led to a loan to Milan.

The now 25-year-old struggled at first but eventually ended up finding his footing in Italy, becoming an important part of Gennaro Gattuso’s tactics.

Milan would have kept him were it not for the fact the pre-agreed fee of €35m ended up being too much for them, but that doesn’t mean they’ve forgotten about him.

The likely arrival of Ralf Rangnick at the helm this summer means new players will need to be brought in, which includes ‘Lucas Biglia’s heir’, according to Gazzetta dello Sport. 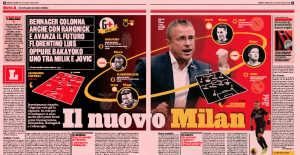 The profile they have decided on is a ‘defensive midfielder with outstanding physical qualities’, for which Bakayoko would be ‘ideal’.

However, they know his price hasn’t dropped that much, which is why he still remains a ‘distant’ target for the club, but it’s made very clear his ‘name still circulates in the rossoneri quarters’.

It appears Bakayoko could have a chance of returning to Italy, however slim it might be for the time being, and it’s likely to be something he’d consider following his successful time there a year or so ago.