Turkish newspaper Takvim report Fenerbahce are in the market for attackers, and they’ve revealed the Yellow Canaries are interested in signing QPR’s Bright Osayi-Samuel.

Yesterday we covered reports Fener are interested in the Nigerian attacker, but travel limitations could be the determining factor in this move.

It’s reported the Turkish side have contacted QPR regarding the 22 year old’s availability and talks between the two clubs are ongoing.

Takvim claim Fenerbahce’s opening offer for the winger is €1.5m, but there’s no agreement between the two sides at this stage

Along with Osayi-Samuel, it’s reported Houston FC’s Alberth Ellis is also on the Turkish club’s shortlist ahead of the summer transfer window. 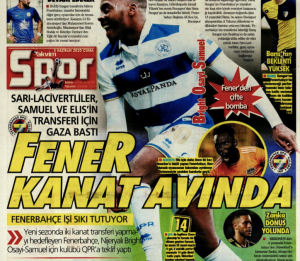 Osayi-Samuel has made 28 appearances in the Championship for Mark Warburton’s side this season, scoring five goals and providing eight assists.

His contract with the London club will expire at the end of June 2021, after extending his deal with the west London side in February.