Andreas Christensen is a player very much in a trap.

It may largely be a trap of his own making, and one which comes with a very big salary, but it’s a difficult situation for him nonetheless.

Last season he made 27 appearances in the Premier League, and that followed on from two consecutive seasons when he’d been getting 30+ Bundesliga games at Borussia Monchengladbach.

This season he has three Premier League appearances, and ten in the Europa League. It’s clear Maurizio Sarri doesn’t see the player as part of his core plans, but at least he’s getting some football.

In usual circumstances, if there was little prospect of no more league action next season, he’d leave the club this summer.

These are not normal circumstances.

Chelsea are facing a two window transfer ban and FIFA won’t delay that whilst they appeal. The next step is the Court of Arbitration for Sport, but Christensen doesn’t sound 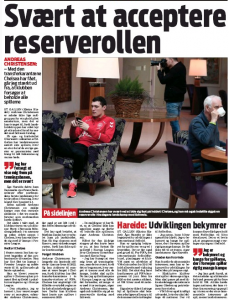 Speaking to Ekstra Bladet, the defender said: “The messages we’ve got are that Chelsea can’t appeal the case and therefore want to keep all the players.”

He didn’t make clear where the message has come from, but did express his unhappiness with the current squad scenario he finds himself in: “The situation I have ended up in has been very difficult to accept.”