Announced as having already signed with Milan by some, Olivier Giroud remains a Chelsea player until June 30th.

The Euros, however, take place before that, and there is a feeling that something will get organised before that so he can play with a clear mind.

That’s why Gazzetta dello Sport believe he is ‘ready to say yes’ to the Serie A side, because while ‘there is no shortage of proposals’, the contacts with Stefano Pioli and co. ‘are satisfactory’.

Not only that, but Giroud is ‘attracted to the idea of wearing a historic short like that of Milan in Europe’, hopefully as a main protagonist rather than the supporting role he currently has at Stamford Bridge.

That’s something the Italian manager plans to do for the most part, and that’s why he’s decided to have a new experience rather than accept the ‘extension offered to him by Chelsea under the same current conditions’. 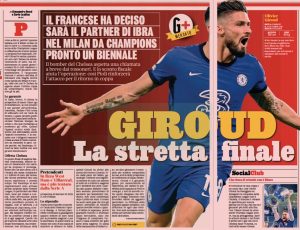 West Ham, Valencia and even recent Europa League winners Villarreal have all come forward, but not even their trophy ‘convinced Giroud to say yes to the Spaniards’.

As for the wages he would receive in Milan, the France international ‘would like to continue earning €4m net for next season and the next’.

That’s something they’re prepared to pay, as they see Giroud as ‘the right player in terms of characteristics and experience to vary the chances of Pioli’s team in the box’.

With all this in mind, ‘it will not take long to reach the conclusion of the deal’, with Gazzetta plastering their headline by saying the deal is now in the ‘home stretch’.